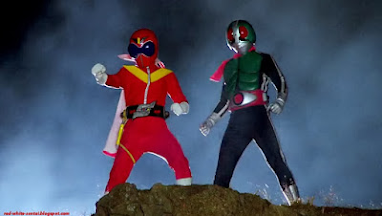 Well, it's been some time since I decided to do some "nonsense rambles" here, right? I did remember writing about Toei's Toku in the Showa era. The Showa era was a long era starting from 1924 to 1989 under the rule of Emperor Hirohito. It was also the time when Imperial Japan sat and also the time when the empire finally sank after World War II. It was also the era of the birth of Modern Japan after seven years of the short-term American occupation. Japan eventually rose and kept rising for a long time introducing new technologies and concepts that Chinese, Taiwanese, and Korean would use a lot and improvise later on. So what's the big influence of Toei itself. Just something worth to note that I love a lot of Showa era Super Sentai while thinking the majority of the Showa era Kamen Rider seasons are not my type.

What important events happened during the Showa era? World War 2, and the long-running Cold War. The Cold War Era was a geopolitical war between the USA (with its respective allies) and the Soviet Union - a battle of an exchange of ideas. A lot of shows were influenced by the Cold War and the two major world wars. Who can remember the creation of Captain America as he battled the Red Skull? Who can remember the X-Men where they are treated differently for being born different? Who can remember Magneto's infamous storyline of him as a survivor of the Jewish holocaust? The influence was pretty much worldwide. Not to mention, Marvel did once work with Toei and Toei also took a few ideas from Marvel - such as the Japanese Spiderman and Battle Fever J.

It would be important to take a look at Toei's beginnings. One could notice the rise of two shows - Sentai (before it got Super) and Kamen Rider. There was Kamen Rider (1971) which is now called The First Kamen Rider. The first Kamen Rider show featured the Shocker Army was formed by Nazi remnants though strangely - most of its members are from Japan! In real history, there are also shock troops in real life - they are usually better trained than the rest of the troops! The Shocker troopers also did the Nazi salute and they had the tribute of the Nazi Eagle. In 1975, a new series called Himitsu Sentai Goranger began and had a two-year run. What was interesting was what Goranger's main antagonist Black Cross Fuehrer resembled a Ku Klux Klanner in many ways. The Great Leader of Shocker from the first Kamen Rider later showed a red version of the Ku Klux robe. Both shows had a two-year run making one wonder if you're willing to watch these old school shows. Sure, I do like most old school Super Sentai while I usually prefer new school Kamen Rider these days. 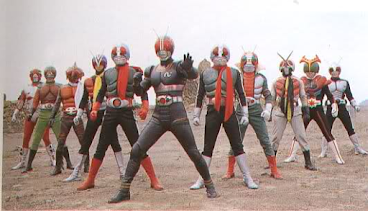 It should be noteworthy that the Showa era of Kamen Rider ran on the Great Leader engine. From 1971 to 1975 - we had the Great Leader harass the heroes. Kamen Rider V3 was a direct, fortunately just long enough sequel, of the first Kamen Rider. V3 was followed by Kamen Rider X, Kamen Rider Amazon, and Kamen Rider Stronger. Kamen Rider (Skyrider) later came after  Stronger and was intended to be a reboot but brought back the other Kamen Riders. X did feature a new villain called the Government of Darkness which was a secret society. Kamen Raider Super-1 had the battle of sciences with the Dogma and Jin Dogma - a battle of ideologies. In 1987 - the fan-favorite Kamen Rider BLACK became the last true Showa Rider. Black itself was trying to reboot several concepts such as Gorgom is a rebooted Shocker (without mooks in silly costumes) and their influence in Japan's political landscape. Pretty much a battle of ideas!

What should be noteworthy is the daring direction Super Sentai took during the 1980s. I didn't really think too highly of the pre-Soda series either. I thought Battle Fever J was a good exposure to the past, Denzi Sentai Denziman wasn't really anything cool for me, and Taiyo Sentai Sun Vulcan isn't as great as some people thought it is. Hirohisa Soda is a guy praised for his work but can get unintentionally overshadowed by other people like Yasuko Kobayashi. I felt that this guy needs more exposure to the non-Japanese audience watching Super Sentai.
The whole exchange of ideologies is focused on a lot of Soda's series. Well, the space theme did influence Soda though science took a greater scope on him. For instance, Dai Sentai Goggle V has the Deathdark seeking to use evil science in its half-brained operations. Kagaku Sentai Dynaman has the Yumeno Invention Center battling the evil science of the Jashinka. Though one can note that Chodenshi Bioman, Choshinsei Flashman, and Chojuu Sentai Liveman really taught about the dangers of science at a more detailed scale. The battle of ideologies was pretty much on during Soda's era. Bioman focused on human feelings and why they're important. Flashman on the ethical issues of life manipulation which contrasted the Flashmen from Mess. Liveman was a battle for the meaning of life itself which Omura would picture so beautifully with so much realism! Though I believe Soda was actually getting burned out after crafting these stories. Denshi Sentai Megaranger also brought back the same issues but I don't think they were as well-crafted as Soda ever could. Megaranger's a fun show but I think it's a great loss not to see Bioman, Flashman, and Liveman.
Hikari Sentai Maskman also had the battle of ideologies. The Underground Kingdom Tube has Emperor Zeba as a corrupting influence that seeks to conquer the world above for himself. The Maskmen were the light and Tube was the darkness. Princess Ial carries the ideals of peace while Igam carries the ideals of conquest. The political plots in Maskman were seen when Zeba is blindly followed even by Igam, the true heir of the throne. Zeba also was responsible for countless bloodbaths and symbolizes the war freak mentality. Also, I want to think Ial and Igam may have been meant to represent two eras of Japan. Ial may represent Modern Japan and Igam as Imperial Japan.
Maybe, we can also put Dengeki Sentai Changeman and Dynaman commentaries on Social Darwinism. The Gozma Empire conquers planets and spares those that they can use, takes the fittest, and uses them in their conquest. Star King Bazoo pretty much as a god complex going on, believing in the survival of the fittest. The Nazis and Fascists were pretty much believers in the survival of the fittest too. Though one can also insert Dynaman here. Dynaman's Jashinka had the fable that the one who gets 10 tails will gain absolute power. The Jashinka members were not only into evil science but believed in the survival of the fittest. Emperor Aton even was proud of his son Megiddo finally defeating him in armed combat. 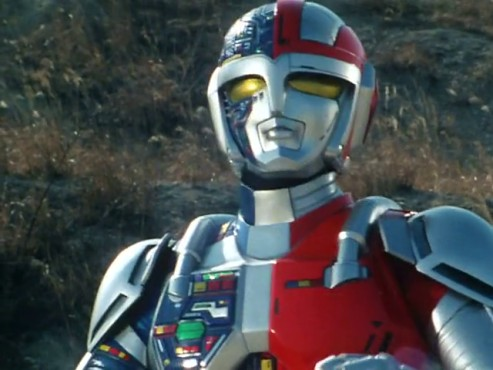 Not to mention, Chojinki Metalder was way different than its space-themed predecessors (Gavan up to Spielban) - so different (and unusually serious) that I think that it led to its cancellation after 39 episodes. The show is quite rushed and there could've been a lot of development for the characters with 11 more episodes. We could've explored more of Dr. Koga's past or even more of God Neros' past. God Neros is obviously named after Emperor Nero. The story of Metalder ends up with that God Neros' true identity as Murakami was a Japanese wartime criminal. Dr. Koga saw the foolishness of war and created Metalder to combat God Neros' schemes to launch the world into World War 3. In the end, Metalder also ended up sacrificing himself to save the world. Metalder becomes a shell of his former self, not thinking about himself to save the world that could've been doomed if he exploded. I wonder was Metalder meant to be a commentary that only older Toku fans could've understood at that time?

Just my own thoughts and nothing more!