Some Possible Meanings Behind the Gorma Monsters

- May 08, 2013
I haven't thought much for the Zyuranger monsters but I've decided to do some Dairanger monster analysis for now.  Not all will be featured though:

Key Jester- The symbolism of the key here is that he gains access to areas.  He gets the souls of children via the "key of their heart".

Mirror Magician- Another mirror-based monster and for me, better done than Mirror Jigen.  This monster trapped women into his dimension whenever they looked at the mirror emphasizing vanity. 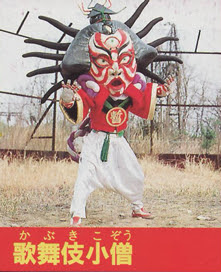 Kabuki Kozou represented the art of acting- you can pretend all you want but you'll never be what you pretend.

Kageru Zukin as a flame-based monster may have also portrayed making intense decisions.  After all it caught Daigo and Kujaku attempting to destroy them leaving the other Dairangers in a heated decision.

Copy Empress may symbolize the deception may work for awhile but it can be overcome by the real deal.