Showing posts from July, 2019
Show all

Ryusoulger, A Magazine Scan Reveals Some Possible Development, And My Plan To Take A Short Break From Said Show! 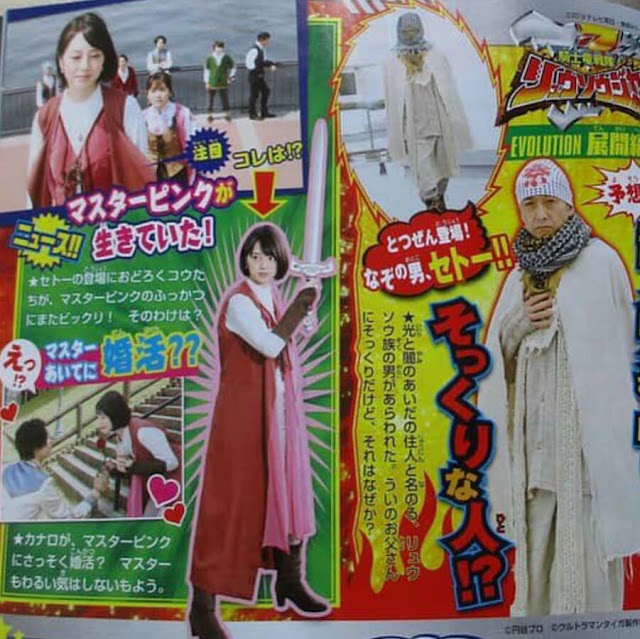 I can't say that I'm really going to take a break from Ryusoulger to focus on Kamen Rider Zero-One and the K-Drama series Vagabond. Maybe I will, maybe I won't but it seems August won't be the time that I'd take that short break. I did take a short break from Kamen Rider Zi-O and resumed viewing later. This magazine scan reveals that one of the Ryusoul Masters namely Master Pink (and yes, Sailor Moon is back) and the identity of the mysterious masked man is on. Next week, I heard Wizeru will die and it seems bigger development is happening.

August would probably give some interesting stories for the next four Sundays. That would also be the time when Kamen Rider Zi-O will be wrapping up (and it seems that the series has finished its filming). The next four Sundays may be devoted to more unraveled mysteries of the Ryusoul Tribe. I don't know how August 2019 will impact me there considering that it's Zi-O's wrapping up time and getting my vib…
1 comment
Read more

Ryusoulger 19: Tyramigo's Time To Shine And A School Teacher 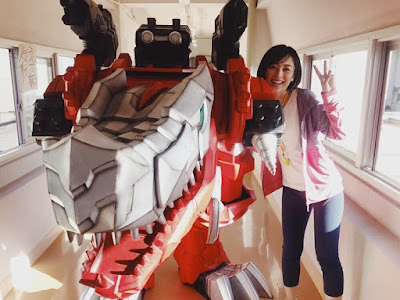 Well, I'm kind of glad that the subs got released earlier than expected. I was about to take some break off with the posts. Side note, I may temporarily decide to take a break from Ryusoulger (from September to November 2019) so I can focus on making Vagabond and Kamen Rider Zero-One related posts. But now, it's time to put on my fake Middle Ages Englishman cap and write on! This episode is Yukari Taki's first appearance as a Super Sentai guest star though she has been more of a freelance actress. Heck, I'd be lying I wasn't hurt. XP

Tyramigo is starting to love Japan now, is he not? I love this scene where he plays baseball and I don't know why these guys can normally just play with him. Toku logic? Superhero logic? I guess everyone gets used to unusual characters every now and then. People run off when monsters appear because they are causing carnage. Melt later arriveth and asketh Tyramigo to bring some stuff home.
This is kind of uncalled for but no heroes…
Post a Comment
Read more

My Final Thoughts On Denziman

So I finally finished Denziman. While I normally prefer old school Super Sentai to new school ones but it's not always the case. For me, it's all about which show does good and there have been good new school shows such as Go-Busters (though it's about to go old school now) and maybe I can say Kyuranger (sorry bashers) or even Lupinranger vs. Patranger for me. But, I'd like to really talk about how Denziman just ends up passable in my list of Super Sentai series watched.
So how does it go? I could go on and on with the following issues...
I think Queen Hedorian of Denziman is well, basic. I need to cut some slack considering it's still an early Super Sentai. Maybe, the madness of Bandora in Zyuranger (which was also acted by the late Soga Machiko) is more fun to watch than Denziman. While she's an interesting villain in the sense that she's actually a benevolent boss in many ways but Bandora was more interesting to watch. Maybe, I could also say Spielban&#…
2 comments
Read more 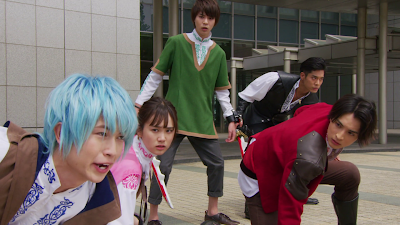 This week's Ryusoulger reminds me of where the main cast of heroes would boast of their fighting abilities out-of-suit. Nobody can deny that Super Sentai (and also Metal Hero, Kamen Rider, and Power Rangers) have those kinds of scenes whenever the plot calls for it. However, we can't also deny that stuntmen are necessarily there to perform the more dangerous scenes too!


Here's a behind-the-scenes with Tatsuya Kishida and his suit double Yasuhiro Takeuchi. The most common out-of-suit fight scenes are always rangers vs. foot soldiers but not-so-much on rangers having a prolonged fight with the monsters-of-the-week. The drill paper-wise seems to start the fight out-of-suit then don the suit when stronger enemies appear, right? Though, it's not always every episode that happens because these scenes should only be inserted for the plot.

Well, my reviews always depend on when Over-Time can release the subtitles, right? So just expect my reviews to come AFTER MONDAY now! Well, it's time to pretend to be a Medieval Englishman once more with my Ryusoulger posts! This week's episode featureth some badass fight scenes from the main cast. Was this episode done to brag the raw ability of the cast? Sidenote, this week's episode is written by Hiroya Taka who I'm yet to be familiar with.
The beginning episode featureth the arrival of a new monster called the Golem Monster. Ryusoul Red, Ryusoul Blue, and Ryusoul Pink show up where the monster is but it negateth their powers! What is causing the negating?

The Ryusoulgers do some Googling. Okay, Melto since how fast are you able to adapt to modern age technology considering you're technically that old? They find out about the Wishing Stone which could be the source of the Menasaur's powers. 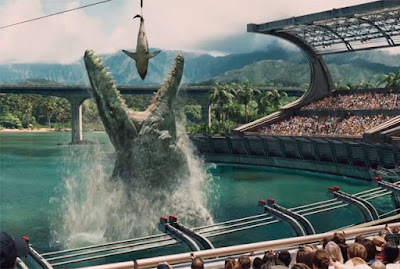 Well, I'd like to apologize for the now slowing down weekly reviews for this reason -- Overtime subs has been having delays in releasing the Ryusoulger subs. Also, I have been having some real-life issues going on. Now, it's time for a review that focuses on Mosarex. That's why I'm using the Jurassic World picture there!
As we remember last week -- Gachileus bit the dust. Poor Creon thinketh that Wizeru has been gone. Surprise, Wizeru is still back! I guess he never saw Wizeru just simply run away. Now, on for the main scenario...

There's a young child named Kentaro who wants to look for a rainbow. Canaro is initially uninterested until a cute girl appears. But looks can be deceiving, right?

I have to admit I did laugh at the "undressing" scenario which turneth out to be Wizeru in disguise. The whole stunt alloweth him to use Ghost Ship Menasaur to capture the said creature. I wonder did Wizeru watch Jurassic World 2 before he showed up?