Showing posts from January, 2016
Show all

Zyuranger, Abaranger And Kyoryuger: My Thoughts On The Threefold Dinosaur Super Sentai Trilogy! 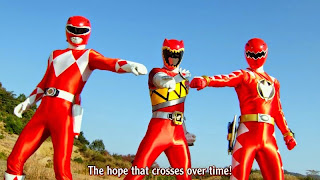 Not everybody loves dinosaurs, maybe a lot of children do but not all of them. In 1992, we had Kyoryu Sentai Zyuranger. Strangely, the two successive dinosaur themed shows happened during the 10th anniversary and 20th anniversary of Mighty Morphin' Power Rangers which I think is not wrong at all. I guess Toei wanted to celebrate their entrance into the American market for Abaranger and Kyoryuger which I will expand further.


Kyoryu Sentai Zyuranger started out as the first dinosaur Super Sentai though I still feel like saying, "Mammoths and Sabertooth Tigers are mammals!" The show itself is IMO pretty much a shadow of Chojin Sentai Jetman, even if I do feel like it's overall better than Mighty Morphin' but I can agree with some of the flaws of the show. Unlike Jetman, it may have been overshadowed and I wonder is this show really overrated or underrated? I wonder how are Power Rangers fans liking the Kyoryu Sentai Zyuranger DVDs if they already have one?

Super Sentai, The Riddle Of Steel And Swords! 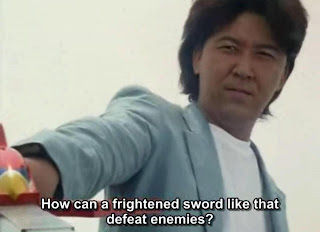 After writing on two articles on swordsmanship namely non-red ranger swordsmen and them red swordsmen, I just thought of that line by Yuusuke Amemiya/Red Falcon in Gaoranger vs. Super Sentai movie. The statement was, "How can a frightened sword like that defeat enemies?" This was the lesson that Gaku Washio learned from Yuusuke when they met. So I thought I might make some instances where the enemy supposedly had a stronger sword but was defeated at the end of the duel.

I'll give a few examples below.


In Bioman episode 30, Doctor Man had a powerful katana prepared for the Mantis Kans. In this episode, even if the katana may seem "superior". At the hands of Monster who was an incompetent guy, Shiro Gou/Red One managed to really get over the dilemma of the samurai sword. Mantis Kans soon had that super powered katana that split even the Bio Shield into two but cleverness and proper use of the Super Maser saved the day. 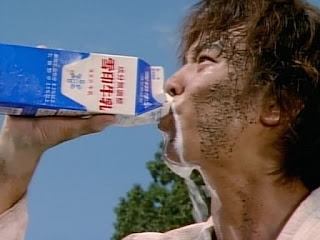 Here is one of GoGoFive's really intense moments out of suit. Okay, my favorite has still been Nagare Tatsumi. Daimon here deserves some spotlight for this rather reckless move.
Is it me or has this episode become a public service announcement to drink milk? I do find the opening to be pretty weird with drinking all that milk before entering into battle. It does take time to absorb the nutrients in your food, right?
This is a great opening up where both of them are exchanging judo throws between Daimon and Spartan. It's pretty risky to fight monsters out of suit if you ask me. Sidenote, I felt like Chad's use of karate in Lightspeed Rescue was better written than this scene.
1 comment
Read more 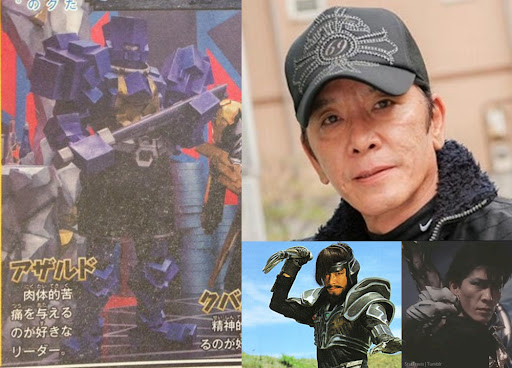 After updating on UkiyaSeed, I have noticed here's what I'd consider to be a good news/bad news scenario. So far, Joji Nakata did voice Rosyuo in Kamen Rider Gaim but never appeared in the flesh. So what's my take? The guy has played two noteworthy villains namely Sir Kaura for Flashman and Great Profesor Bias for Liveman.

I haven't seen much of Flashman but seeing him in action based on a few clips - I'd say he was a really badass foe. He was responsible for kidnapping the Flashmen when they were still so young (WTF, how could he do that?) and I'd say it was partly his fault that they grew up in the Planet Flash and its four moons. So talk about how your actions end up having an equal and opposite reaction. What's so badass about him is after a fatal exchange of blows with Jin/Red Flash - he's still alive for the next episode where he performed a kamikazee attack in the next episode. He held the secrets of the Flashmen which added an entirely new leve…
1 comment
Read more

Them Blue Rangers Affiliated With Water 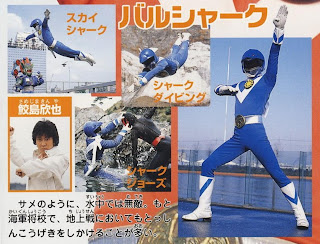 I'll admit, every time I see the color blue, it reminds me of water. After all, don't you hear of the term "the blue ocean"? Toei had a trend for some time of having blue rangers getting involved with water either as power or most of the time, profession. The whole idea wonderfully made it into Power Rangers Lightspeed Rescue with Chad Lee. Now moving on...


Kinya Samejina/Vul Shark is an EDS Naval Officer. Haven't seen much of Sun Vulcan to comment on this guy.


Yousuke Shima (NOT SHIINA, who is Hurricane Red) is a swimmer and surfer. His dream is to create artificial gills for divers. Cool to see how his mermaid-related episode was somehow used in Lightspeed Rescue which I feel was an improvement from an idea that seemed sunk into the bottom of the ocean during the 80s. 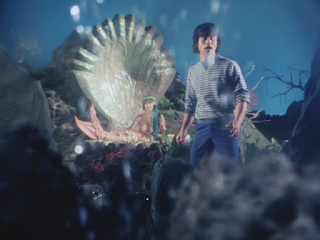 Well Power Rangers does get ideas from very old Super Sentai seasons then modifies them. Chad Lee himself feels like a huge tribute to Hirohisa Soda's aquatic blues like Yousuke Shima, Ryuta Nanbara and Ken Hoshikawa instead of his GogoFive counterpart Nagare Tatsumi. If we're going to go before Soda, Kinya Samejima had a shark motif going on. Chad being different than Nagare ended up introducing something new for Power Rangers.
Dynaman episode 11 has Yousuke meeting a mermaid and the enemy getting involved in this rather complicated situation. Jashinka plans to use the animals of the ocean to cause havoc towards the surface world. I wonder, did Yousuke have a crush on the mermaid during that episode? The mermaid like almost every other guest in Tokusatsu shows only appeared for one episode. There wasn't really much interaction but the idea was revived years later in Power Rangers. 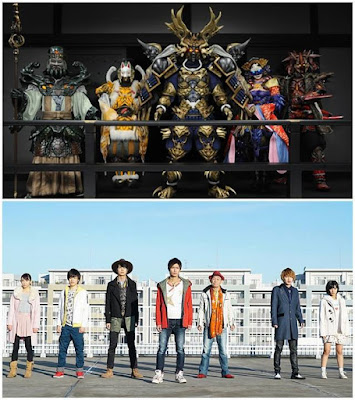 After looking at UkiyaSeed's blog, there's some details and yes, Ninninger's finale is just three more episodes left as episode 44 resumed broadcasting on January 17, 2016 after a holiday break. So what's going on? Aside from the big bad Kibaoni Gengetsu has been revived, this might be the most intense moment yet. The Big Bad himself revealed that he had an illegitimate child 444 years ago which shocked everyone that Kyuemon is his son. I felt the revelation was so sudden in the past few episodes.
1 comment
Read more 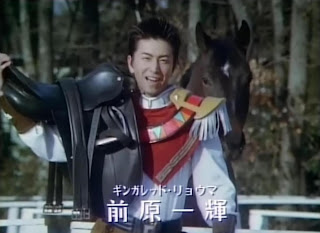 I decided I'll do some backtrack with Gingaman considering I haven't written that much posts. After watching the series twice, I thought this would be a good entry. Again, this isn't a news blog compared to JEFusion or Ukiyaseed so don't expect this blog to be updated with every episode.

While he wasn't supposed to be the 133rd Ginga Red since he wasn't the firstborn but events on the first episode altered his fate. When he saw his brother Hyuga supposedly perish before his very eyes, he has no choice but to take the Star Beast Sword to become the 133rd Gingared. Although he does seem immature at first but it was fun to watch him mature as a leader. In spite of his victories against Sanbash and Budoh, he had doubts because by birthright, he wasn't supposed to be Gingared. He wanted to return the Starbeast Sword to his brother during the latter's return, he discovered along the way he was really picked by fate to be Ginga Red and he wasn&…
Post a Comment
Read more

Is That Flame Sword Stunt Really That Risky? 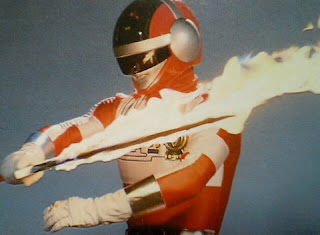 After watching the interview of Michiko Makino, she had revealed that the fire sword stunt had a prop sword wrapped in oil-soaked rags and placed on fire. It was really that hot! As much as some may call it the "flames of courage" but at times, I felt it was too reckless and not to mention too risky to be given more screen time.


In Kakuranger, there was the time when Sasuke used the Flaming Shogun Sword in episode 20 against the Hanarangers. If one notices the scene, the flaming sword wasn't used all the time. I guess they used more than one prop sword filming that awesome scene because it's a very risky scene to do. As for Muteki Daishogun's finisher, it was the usual use of already filmed stock footage for robots executing their mecha. Goseiger gave the same treatment for its robot Gosei Great's finishing move.

Them Red Rangers Who Were Sword-Fighting Experts 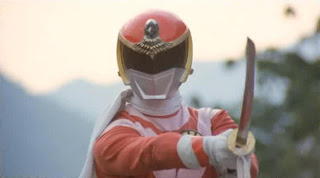 It's somehow typical to typecast red rangers as "that swordsman" even if it wasn't always that way. Here's the line of red rangers who stood out as sword handlers. The sword was also a symbol of leadership and justice so I guess that's why this long line exists.


Takayuki Hiba/Vul Eagle II was the first to introduce the art of red ranger swordsmanship. That blade in this picture looks pretty sharp. I haven't seen much of Sun Vulcan to comment on this one. I just got the information from Shogo B'Stard. Sidenote, it's too bad Rocky De Santos in Mighty Morphin' never got this good. The rather competent Jason Lee Scott was so unfortunate to get such an idiot to replace him.


Whether or not Kenichi Akama counts is something that I can't conclude but I decided to add him here. Even if his main weapon is a rope, he had been seen using his sword more in combat. He has clashed with Deathgiller in episode 15 which formed some kind of rivalry with them…
4 comments
Read more
More posts