Showing posts from August, 2009
Show all

Pictures taken from: http://tokugalaxy.tokusatsu.org/ (not in English)

Just fooling around:
Hiruta Kazunari (Blue Mask) rather looking all nerdy.
Blue ranger meets another blue ranger. Masujima Yoshiro (Blue Racer) and Asakura Keiya (Blue Turbo). Carranger was loosely inspired by Turboranger nonetheless.
Kenta Satou and Asakura Keiya (he almost looks like Masashi Mikami) trying to morph to their Turboranger selves. Ha ha!
Kenta Satou and Ryosuke Sakamoto out for a drink to warm themselves up. Both red rangers are having a good time.
Kihachiro Uemara (Green Flash in Flashman and Chevalier in Fiveman) with Kigatawa Tsutomo of Godzilla fame. 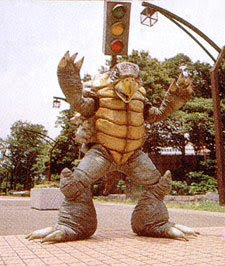 Dynaman started the trend of combining inanimate objects with animals which were the recurring monsters of the week of Kamen Rider V3 and later they were brought back in Jetman shortly after the Cicada Kid was destroyed by the Jetmen.

The following are rather possible unused concepts, newer artistic liberties or whatever.
Zyuranger's Dora Tortoise was more of a Jetman or Kamen Rider V3 type of monster than of its own kind. Why? Most of Bandora's monsters were mythological based except this one. He may have been an unused concept and I feel this is a Kamen Rider costume remodeled for the show.
Ohranger's Bara Dart was a spider and dart cross-combination.
Ohranger's Bara Mace would seem to be if Vyram combined the mace with an armadillo. Too bad Jetman never got this idea out.
Gaoranger's Suffering Org's disguise seems to be a cross of a reindeer with presents.
Hurricanger's Shirarnizu is a scissor-beetle combination. Why do I feel this is an unused concept i…
Post a Comment
Read more

Some Moral Lessons in Super Sentai 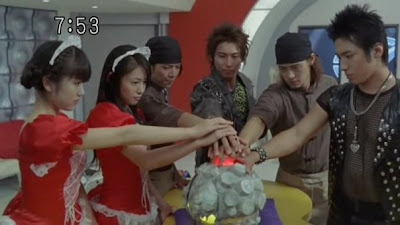 It seems that Super Sentai did focus on some very important lessons in life like:

Teamwork is necessary and the God-given differences among
the teammates be put aside to succeed.

You can never change the past but work for a better future.

Jealousy and bitterness are dangerous.

The unity of a family is powerful.

Sometimes your rival may become your best friend.
There were rebel rangers too you know- good guys

Even a zero can become an unexpected hero.

Even Sentai's best heroes fail for they're only human.

Make up for your mistakes while it's early.

Your lies will catch up with you.

NEVER attempt to imitate anything dangerous you see on TV.

Sacrifices have to be made for the better.

Life is full of difficult choices that involve personal feelings.

Letting go of the past and going for a better future.

Powerful as they are, the rangers aren't invincible,
only the God of the Univ…
23 comments
Read more
More posts